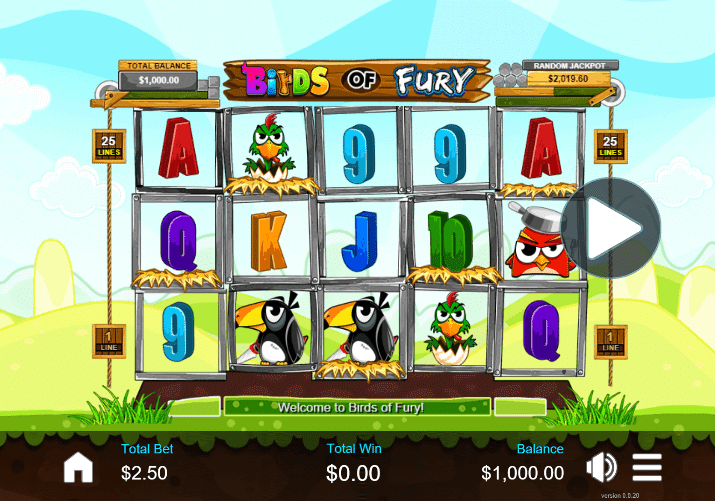 Angry Birds was the game everybody used to play on their mobiles, and now it has been transformed into a fun and engaging slot game called Birds of Fury! Instead of flinging the birds around the screen, however, they will be dropping down the reels to try and get you a winning combination.

Real Time Gaming brings Birds of Fury to the online gaming world, providing cartoon-style graphics and a cheerful design, if you ignore the bad-tempered birds! The game is set on some rolling hills in the sunshine, with blue sky and white fluffy clouds completing the image of a perfect summer’s day. However, the peace of the day is disturbed by flying birds across the screen, so it will really feel like you are spinning the reels inside the world of Angry Birds! The tune that plays constantly in the background is jolly, but it can get annoying after a while!

Birds of Fury has 5 reels and 3 rows, like many other slot games, with a maximum of 25 paylines to try and win with. Players can choose what value bet they want to place, and choose whether they want to autoplay or spin the reels manually.

Birds of Fury has some familiar symbols that players will recognise from other slot games and from Angry Birds. As well as the usual 9, 10, J, Q, K, A symbols, the higher value symbols are some birds which look remarkably similar to the ones that became so popular in the original game!

There is a green newly-hatched chick, still in his shell; a small but menacing blue bird clutching a bomb; the classic red bird that seems to have a pan on his head and a fork in one wing; and highest of all, a toucan carrying a saw.

These characters may not be the happiest or most good-tempered, but they will certainly bring a little bit of excitement to the game!

The Scatter symbol is simply the Birds of Fury logo, and when it appears 3 or more times on the reels, players can win 10 free spins with a multiplier added on top!

The Wild symbol on Birds of Fury is a yellow bird holding some sticks of dynamite. This can substitute for any symbol and help create a winning payline.

Birds of Fury also has some random and unexpected features that could happen at any time during a game. For example, a Birds of Fury Wild can be activated after any spin, turning any Scatters into Wilds and adding 3 Wilds onto the reels. This could be a chance to win big, but no-one knows when it’s going to happen!

Another random feature is a multiplier. A bird will splat into the reels and reveal a multiplier that will be added to any winnings. Furthermore, sometimes after certain spins 3 blue eggs may appear on the screen. You just need to pick one to reveal a special prize.

Birds of Fury isn’t a hugely innovative game, as it’s impossible to say when the features will appear. You can’t look out for them on the reels because they aren’t triggered by any particular symbol, which could make this game quite frustrating. The theming of Birds of Fury around Angry Birds is nice and nostalgic, although it’s not especially innovative. Overall, it’s perhaps not the most exciting or engaging slot game, but it will all depend on whether you are lucky enough to get those special features!

Inspired by the popular Angry Birds game, Birds of Fury is a 5-reel slot that can offer some very special features, if players get lucky!