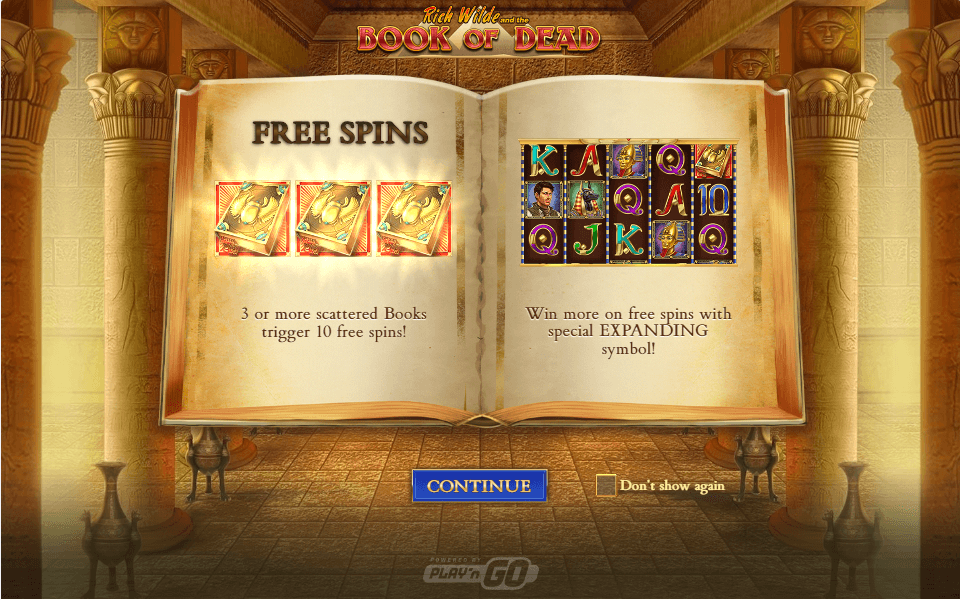 Book of Dead takes players on an adventure, following the explorer Rich Wilde into the tombs of Ancient Egypt. A young, dashing, dark-haired man, Rich Wilde explores an Egyptian temple in his quest to find the Book of Dead, encountering some famous faces as he does so such as Osiris and Anubis.

Egyptian-themed slots have always had enduring popularity, as do archaeologist/explorer type slots, partly thanks to Indiana Jones. Book of Dead slot by Play’n Go is another game in this genre, but it offers enough unique and attractive features to make it stand out from the crowd and appeal to players.

The background music is a mix of traditional Egyptian flutes and pipes, along with a dramatic and tension-building tune. This ramps up the thrills and excitement that players are sure to experience, and fits perfectly with the explorer theme.

Book of Dead slot is a 3 row, 5 reel game with 10 possible paylines. As with all slot games, players can adjust their bet level and coin value so they can play in the way that they prefer. Players can also choose whether to spin the reels manually or automatically, depending on if they want to sit back and relax or have an active role.

The symbols on Book of Dead include the standard 10, J, Q, K, A, as well as the game-specific symbols of ancient emblems, Gods from ancient Egyptian mythology, and Rich Wilde himself. The face of Rich Wilde is in fact the highest-scoring symbol, so players will want to keep an extra close look out for him!

The Free Spins round is the only special feature on Book of Dead, but it is still an exciting bonus that can boost your winning total. The Book of Dead symbol acts as the Scatter symbol that activates this mode, and players will need 3 or more to appear on the reels at one time to access it. This symbol can also act as a Wild during gameplay.

But the best part of the free spins mode is the feature that randomly selects a symbol that will then act as an expanding Wild. The book will open up and the chosen symbol will appear, which means that in gameplay this symbol can expand to cover the reels and give you more opportunities to win big!

Book of Dead capitalises on the popularity of Ancient Egypt as a slot theme to create an engaging and exciting game. Having the character of Rich Wilde adds a personal and immersive element to the game, and players are likely to enjoy the feeling of accompanying him on one of his expeditions. The free spins mode is the most unique and innovative part of Book of Dead, as it adds another level of fun and winning potential to the game.

Join Rich Wilde in his quest to the tombs of Ancient Egypt as he aims to uncover the Book of Dead, a symbol which comes with a very special feature!