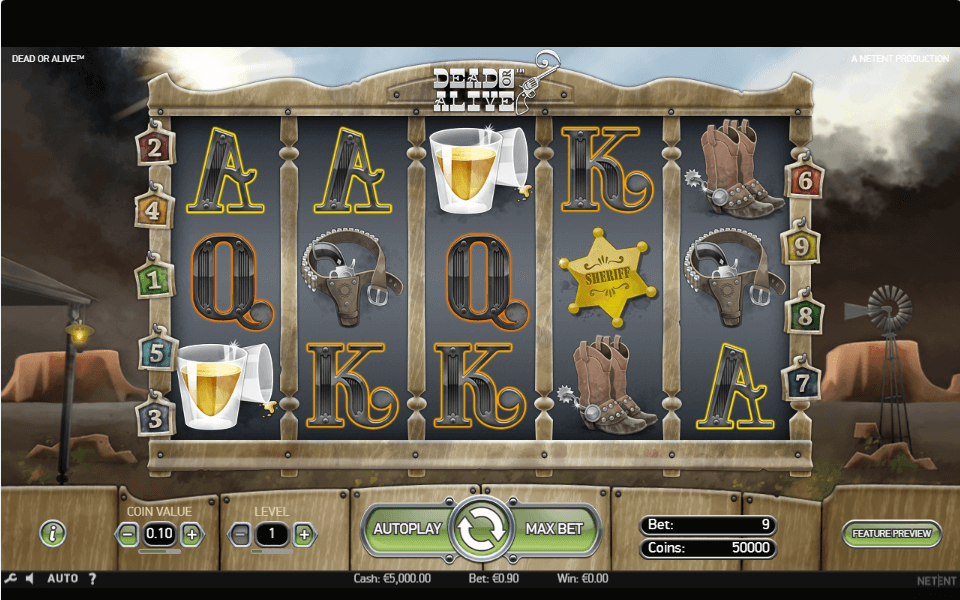 This 5-reel slots game throws it back to the Wild West of America, where cowboys strutted there stuff in the frontier towns and saloons. This slot game may offer a different kind of adventure, but it is no less exciting! It takes the classic slot game and reinvents itself, to make it more unique and so more interesting for players.

With NetEnt ruling this particular section of the Wild West, players can be sure there won’t be any troubles. NetEnt is a reputable and established gaming provider which virtually guarantees a fun, fair and secure game for all of its players.

Sheriffs and outlaws alike are welcome on this game, which is set against the backdrop of the western wilderness at dusk. You may hear some suspicious noises, but they’re only the sounds of nature, and the dogs from the nearby town!

Just like any slot game, simply press the spin button to get started! As well as the usual letter and number symbols, Dead or Alive also has shot glasses, cowboy boots, a pistol holster, and a cowboy hat, which offer varying levels of reward. Offering the most reward, and the symbol all players will be dying to see, is the gold star Sheriff’s badge, which has the potential to win you big money!

There are 9 different paylines where you can try and win, which is perhaps more limited than other slots games. However, there are still plenty of chances to get a winning combination!

Dead or Alive has its own ‘Wild’ symbol, and that is a Wanted poster. Normally an outlaw would dread seeing one of those but, in this instance, it could bring good fortune! This symbol can be used to create winning combinations from other symbols on the reels, and so increase your winnings!

Players can also earn some free spins thanks to the Scatter symbol which, on this game, is a pair of crossed pistols. If players get three or more of these across any of the reels, they will get their free spins!

If you prefer, you can choose to set Dead or Alive to ‘autoplay’, which means you won’t need to keep pressing the spin button to rotate the reels.

You can also decide how much to gamble on each spin, depending on how lucky you feel! The minimum bet is 0.01, with the maximum going all the way up to 18.00.

Although this is similar to most other 5-reel slots games, the theming sets Dead or Alive apart from the others. The Wild West setting adds an extra level of interest and excitement to the gaming experience, and it will keep players on their toes as they look to see whether a Sheriff’s badge, a gun, or a Wanted poster will appear! The background sounds may be disconcerting at first, but soon players may actually feel like they are playing in a dusty saloon filled with cowboys drinking shots of whisky!

This 5-reel slots game throws it back to the Wild West of America, where cowboys strutted there stuff in the frontier towns and saloons. This slot game may offer a...