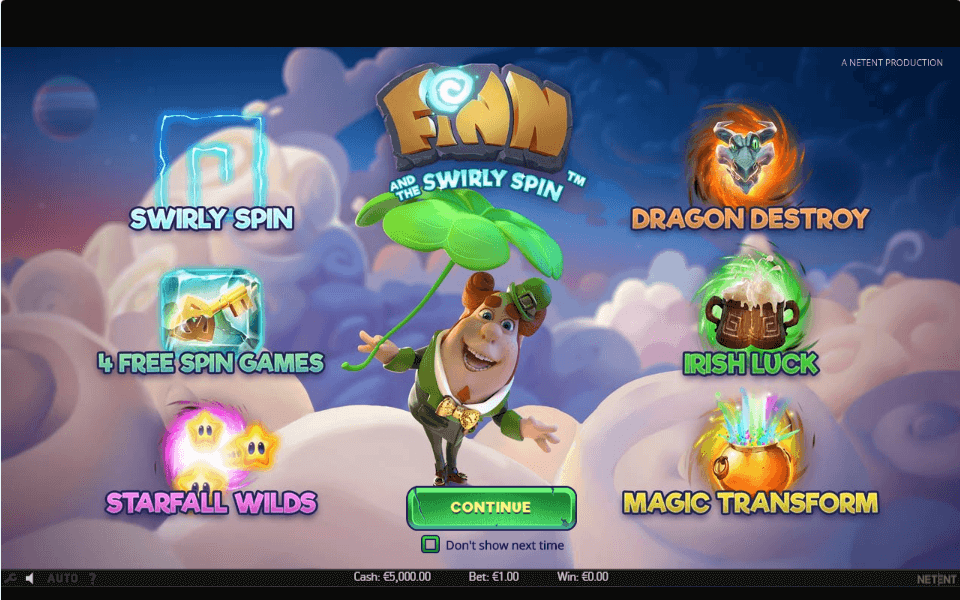 Finn and the Swirly Spin is an original and unique slot game from NetEnt, offering a new layout, extra special features, and a fun character by your side as you play! It launched in 2017 and, since then, has become a very popular choice for casino fans.

Finn is a ginger, flute-playing Irish leprechaun who will join you on your gaming journey. Against the backdrop of the Emerald Isle, Finn will be by your side as you spin the reels, hoping to bring you plenty of the famous Irish luck! His flute playing and background music will keep players feeling upbeat and engaged, and Finn will celebrate just as much as you when you get a win!

Finn and the Swirly Spin slot is a 5 reel game with 5 rows. However, unlike other slot games, it isn’t simply a 5×5 square. It is designed with a spiral pattern, leading gradually into the centre where there is a keyhole waiting to be unlocked.

The symbols on this game include: hearts, clubs, golden horseshoes, four-leaved clovers, acorns, and red diamonds.

When any of these symbols form a winning combination, they will disappear and all the symbols will move along the spiral to fill in the gaps. Getting a streak of these will help you to unlock the special free spins mode.

To get into this mode, players will need to get the key to the keyhole. The key is frozen in ice and is at the beginning of the spiral at the start of every round. Each time the symbols fall, it will move closer and closer to the centre keyhole. But be warned! The reels reset and the key goes back to the beginning after every spin, so players will need a streak of good luck to get it all the way to the keyhole!

There are also Starfall Wilds which can act as a substitute for other symbols to create winning lines. These will appear on the reels a random.

If you are lucky enough to unlock the free spins mode, then you will fall into a fantasy world where the treasure at the end of the rainbow lies! There, players will see four different free spin features: Star Bar, Lava Lair, Golden Pot, and Lucky Mug. These need different number of keys to activate and they will each grant you different amounts of free spins and other bonuses.

For example, some of the bonus features on offer in Finn and the Swirly Spin’s free spins mode include Dragon Destroy and Irish Luck which can help you to boost your winnings. As if these weren’t enough, the Magic Transform feature allows you to change all the hearts or clubs into higher-paying symbols.

Overall, Finn and the Swirly Spin is a unique game that offers something new tot he gaming market. Although the Irish theme is fairly standard, the spiral layout of the reels, the aim of getting the key to the centre, and the innovative free spins mode make this a popular choice for old and new casino fans alike. These features make Finn and the Swirly Spin stand out from the other slots on the market, with its creative approach generating plenty of thrills and excitement for its players!

Finn and the Swirly Spin Slot

Finn and the Swirly Spin is a unique slot game with an innovative spiral layout. With bonus features and a special free spins mode, this game is not to be missed!