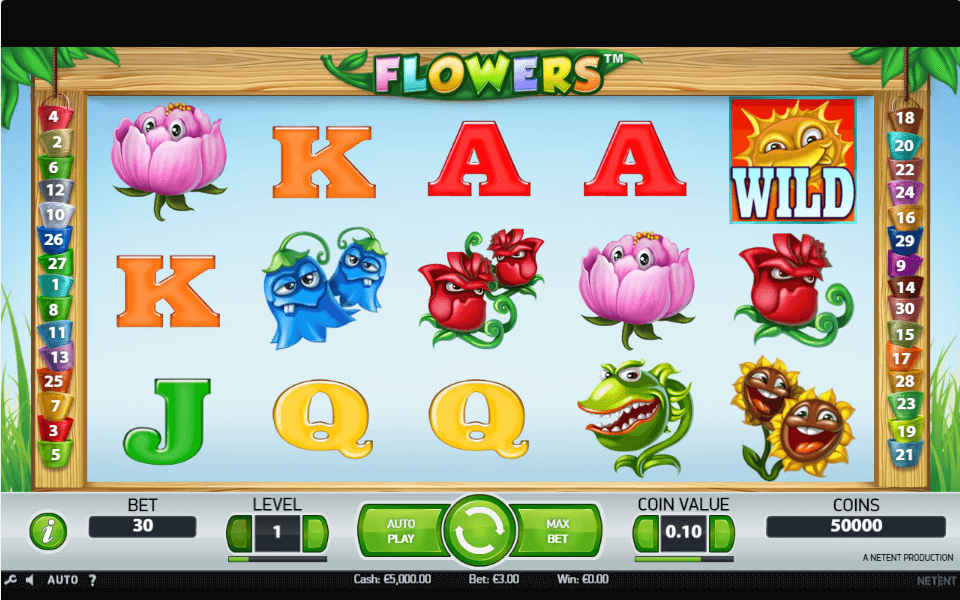 Flowers never fail to bring a smile to many people’s faces, and this slot game aims to be no different! Some slots choose a dark and thrilling theme, but Flowers sticks to the original light-heartedness and fun of the fruit machine. The game, which is supplied by NetEnt, has good quality graphics and sends positive vibes to anyone that plays it!

Players can spin the reels with the sound of nature in the background. There are birds singing, bees buzzing, and the rustles of trees in the wind to complement the colourful flowers on the reels. These aren’t just any flowers though! They have their own characters, most of them happy and smiling, to spread their cheerfulness to the players.

Flowers is a 5-reel game that offers a maximum of 30 different paylines. Players can choose their bet level and coin value before they spin to determine how much they gamble. Then they can choose to either manually press the spin button or simply press autoplay and let the reels go by themselves.

In terms of the symbols on the reels, players will recognise the low-level J, Q, K, A from other slot games. The higher-value symbols are of course flowers of many different varieties! First there are some pretty bluebells, then some pink tulips, then a strange and rather intimidating green monster plant, then the ever-smiling sunflowers followed by the valuable red rose.

These flowers also come in double symbols as well as individually! These appear as 2 flowers on one block, but they count as 2 separate symbols. This could result in some higher wins for players if they land along a winning payline!

The smiling sun acts as the Wild symbol on Flowers. As a vital life-giver to the plants, it seems appropriate that it can act as a substitute for the symbols along the highest possible payline. If players are really lucky, they may get a Stacked Wild which will boost their chance of a win even further!

The cheerful clouds represent Free Spins, and they too can appear as single or double symbols. If players get 3 on the reels, a double multiplier is activated. If 4 or more appear, then players get 10 free spins as well as a multiplier! Each additional Free Spin symbol adds 5 free spins (i.e 8 symbols gives you 30 free spins). Players can also earn extra free spins during their free spins.

Flowers is not an exceptionally unique or thrilling slot game, but it does have some appealing features. The double symbols are a nice addition to the game and, without them, there would be little to differentiate it from any other generic slot. Another attraction is the cheerfulness and happiness the game conveys with its smiling flowers. Sometimes spinning the reels can be tense, but Flowers recaptures the fun and enjoyment which can help players to relax and have a good time while they play.

It may have flowers, but this slot game is nothing like a relaxing afternoon in your garden! With reels to spin and bonuses to unlock, there is no lack of excitement here!