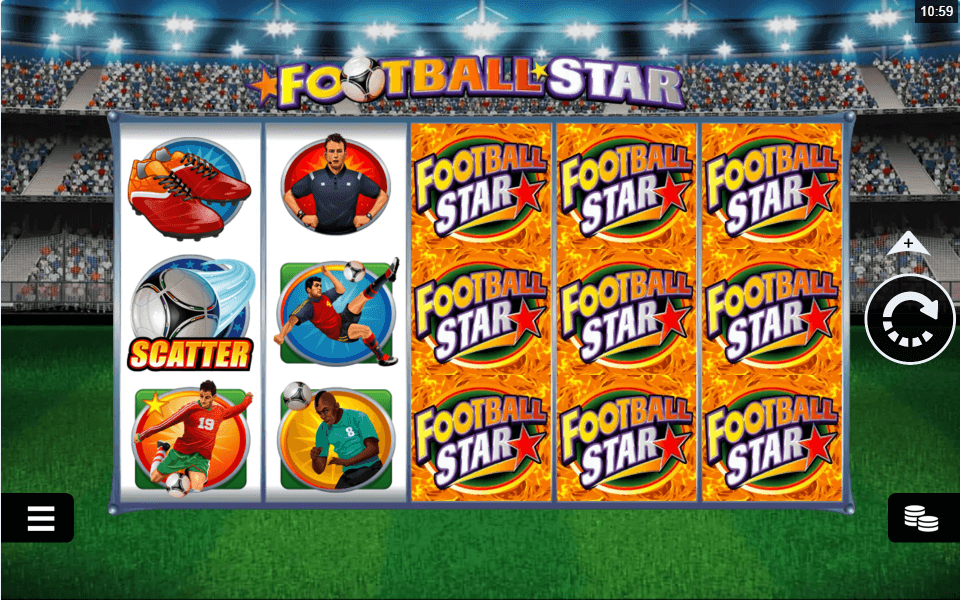 Every day can be football season with Football Star Slot! Whether you’re waiting for the excitement of the World Cup or the enjoying the drama of the Premier League, Football Star Slot can provide a gaming experience that’s almost as thrilling as a top match! If you’re one of the many people that have nurtured a dream of becoming the next Ronaldo or David Beckham, then Football Star Slot can help you live your dreams, albeit on screen instead of a pitch.

Microgaming is the provider behind this game, offering quality graphics and gameplay. It is a 5-reel slot with 243 different ways to win, so players will be hoping to score plenty of goals! Football Star Slot takes place on a pitch in front of a sold-out stadium crowd willing you to net that win!

Players of Football Star Slot will be substituting a warm-up and changing room preparations for setting the level of their bet and coin value. Also, unlike football players, they can select autoplay to just sit back and watch the reels spin round without moving a muscle!

As you would expect, the symbols on Football Star Slot are all related to football! There are images of players mid-strike, a goalkeeper saving a high ball, someone performing a header, a pair of football boots, a football pitch, and a referee showing a red card.

There are no penalties in this game, but there are a number of Wild symbols to benefit players! The Football Star logo acts as the Wild and will appear in reels 3, 4, and 5. These are Stacked Wilds which boost your chances of winning, especially when combined with the collapsing reels feature. When player net a win, the symbols on the winning line disappear and new ones fall into place, continuing until no more wins are made. Multipliers up to 10 can be earned on these successive wins which can build up a tasty total!

A Striking Wild may also make an appearance during the game, if you’re lucky! A footballer will kick a ball onto the reels to randomly determine which will become a Wild, so you’d better hope he has a good aim!

The Scatter symbol is a flying football and you need 3 or more of these to benefit from the bonus it offers. 3 symbols give you 15 free spins, 4 gives you 20, and 5 gives you 25.

Football Star Slot is perfect for any football and gaming fan, with good graphics, sound effects, and special features. Players are sure to become immersed into the game and its atmosphere as they look out for the different symbols to try and get that big win! With the Stacked Wilds, a Striking Wild, cascading reels, and Scatter symbols, there are many ways players can find those winning combinations to become Man of the Match.

Football Star Slot makes you the man or woman of the match every time you find a winning combination on the reels! With the thrills and excitement of a World Cup final, this slot game has lots of features to discover!