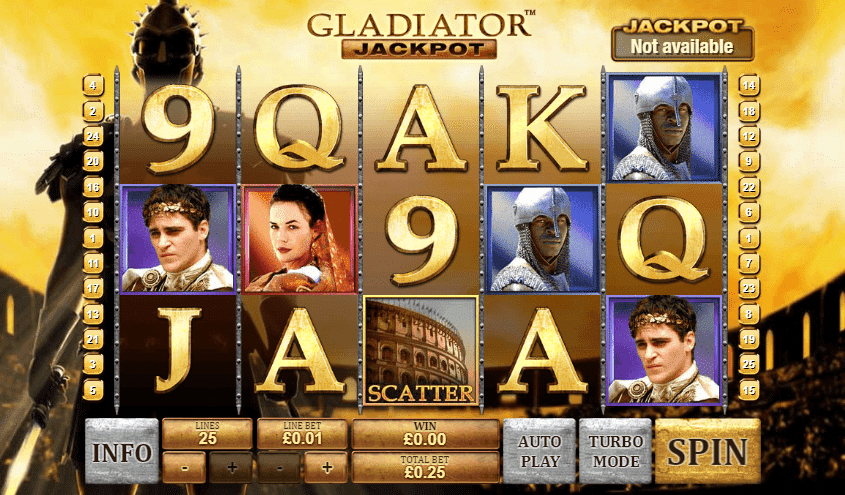 Enter the Colosseum in Gladiator slot and be prepared to be entertained by duels and reels! Set inside this great Roman arena, Gladiator slot has reels of stone and dramatic background music to set the scene for the drama that’s to come. Throughout the game, players will see clips of the film and the activity in the Colosseum which just adds eve more drama to the proceedings!

Playtech is the provider behind Gladiator, and this recent release draws on the epic 2000 film of the same name. With characters from the Gladiator film appearing on the reels too, players are sure to love this game’s design as well as its exciting gameplay.

As with all slot games, players can choose their bet levels and coin values, as well as choosing whether to press spin or watch the events unfold.

Apart from the 9, 10, J, Q, K, A symbols which are standard on most slot games, there are also many Roman-specific symbols. For example, there are gladiators, generals, emperors, and other major figures from the Gladiator film. You may recognise some famous faces on the reels!

There are both Scatter and Wild symbols on Gladiator- represented by the Colosseum and a helmet respectively.

As well as acting like normal Wilds, substituting for other symbols to make up a payline, the helmet Wilds can also activate a special bonus round if 3 or more symbols appear on the reels. If this happens, players will be given access to the Gladiator Bonus room where they will see 9 helmets. Behind each helmet is a special prize, and players will receive all of them!

Finally, there is also a Gamble feature which players can access any time. Players who are feeling lucky just need to guess the colour of the card that is on their screen to boost their winnings even further!

Overall, Gladiator slot is ideal for players who are fans of the film or who just love the Roman era in general! With video clips of the Colosseum interspersed throughout gameplay, as well as the exciting bonus round features, players are likely to be drawn in to the thrills and excitement the game offers. The features are a good addition and help to mix up the gameplay, to keep players interested and engaged. Gladiator is a slot game that is sure to win many fans, both with its theme and with its bonus features.

On Gladiator slot, players will enter the Colosseum to try and win their fortune! With familiar characters, special features, and bonus rounds, there is lots of excitement to be found!