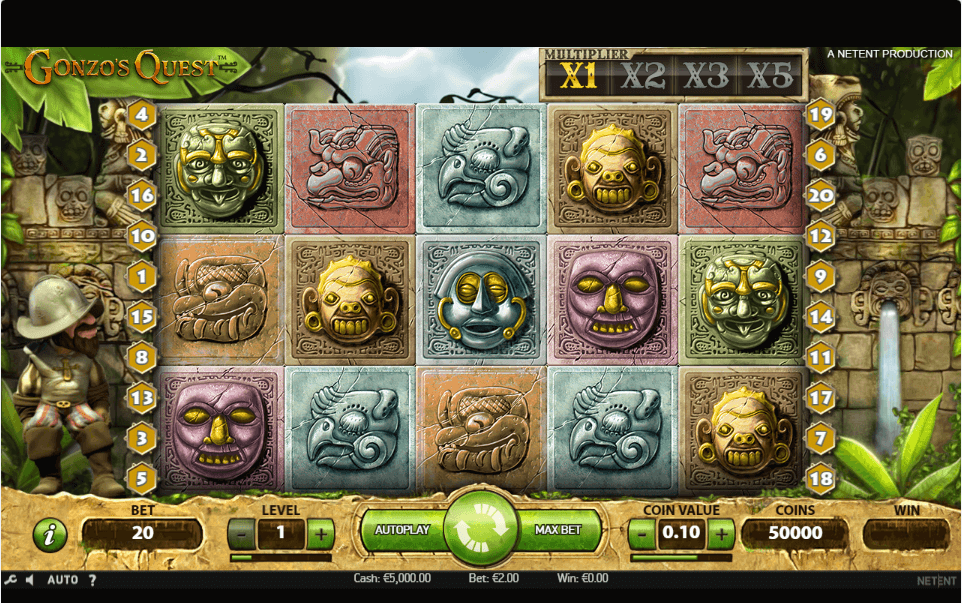 NetEnt has produced an exciting slot game that will appeal to any adventurous gamers. Gonzo’s Quest may not end up at the city of gold, but it does take you to a thrilling game where anything can happen!

This slot game takes you back to 1541, when Gonzo (based on Spanish explorer Gonzalo Pizzaro) jumps ship in the dead of night to hunt for El Dorado: city of gold. Preceding the game itself there is an entertaining film showing Gonzo’s story and the beginning of his quest, which is sure to make players even more invested in this slot than many others!

Gonzo follows his map through the Peruvian jungle which leads him, not to El Dorado, but to a 5-reel slot game. He then leaves it up to you to spin the reels, whilst he looks on from the sidelines. Try not to be too distracted by his fidgeting, particularly with his map, helmet, and beard!

But enough of Gonzo, what is your role in this particular quest? You simply need to press the spin button to try and win (or you can activate ‘autoplay’ if you prefer).  The game is designed just like an Inca temple, with different carvings and figures on coloured blocks acting as the symbols to create the combinations. They range from human faces to animals to birds, to some that are virtually unrecognisable, on blocks of orange, green, red, blue, purple, and more. The highest-value symbol which all players will be hoping for is a blue face with gold trim.

There are 20 different paylines for you to discover on Gonzo’s Quest. You can choose how much of a risk you want to take, with the opportunity to set the amount you want to bet.

Gonzo’s Quest has a special ‘Avalanche’ feature, which means the blocks drop into place, rather being spun on a reel. What this means is, when a combination is made, the blocks explode and more blocks tumble down to replace them! If you’re lucky enough to hit another win, a multiplier is activated. This continues with each additional win, and so gives players more opportunities to win with each spin!

There is of course a Wild symbol (a grey stone with a question mark) and a Free Fall symbol (a completely gold block with engravings on it) which mixes up gameplay a bit. The Wild symbol can act as a substitute for any symbol to create a winning combination, whilst players who get 3 Free Fall symbols on their screen will receive some free spins.

Set against the backdrop of the Peruvian jungle, players will be fully immersed in Gonzo’s adventure. The sights and sounds of this paradise will transport you back in time and place, and the character of Gonzo acts as a funny and reliable companion on your gaming journey. The story, the theming and the special avalanche feature set this slot game apart from some of the more generic options, even though the premise of finding a winning combination is the same.

NetEnt has produced an exciting slot game that will appeal to any adventurous gamers. Gonzo’s Quest may not end up at the city of gold, but it does take you...