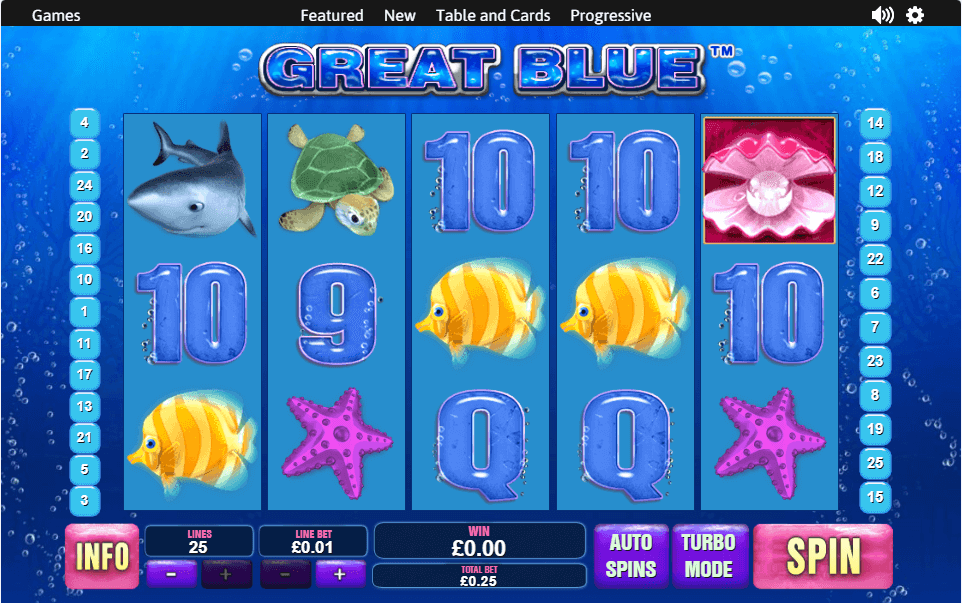 Great Blue slot isn’t for the faint-hearted as it takes players into the depths of the ocean, far from human life. Instead, they will be joined by all sorts of marine animals including the famous black and white killer whale! Players shouldn’t feel scared in this unfamiliar environment however, as, after they dive in, there is jaunty music and the prospect of a big win to keep their spirits up!

There are up to 25 different paylines on Great Blue, which is a 5 reel slot game. Players can elect to activate any number of these lines to give themselves a shot at netting a big win! Great Blue is described as a high variance slot, meaning that wins aren’t as regular as some games, but they can pay out large sums of money at certain intervals!

Although the sound of waves, ripples, and splashes act as a constant reminder to players of their location, Great Blue has many familiar elements too. Players can set the bet level and coin value before they press spin (or autoplay) just like other slots and, similarly, there are the familiar symbols of 9, 10, J, Q, K, A. However, there are some ocean creatures appearing on the reels too which offer come with a higher value. Thee include a starfish, a seahorse, a tropical yellow fish, a sea turtle, and a shark.

The seahorse and starfish are ‘of a kind symbols’, as are the turtle and shark, which means these symbols have the same value and can be used to create matching combinations.

Like most slot games, Great Blue has both Wild and Scatter symbols. The Wild symbol is represented by the killer whale, which can substitute for other symbols to create winning paylines. If a win is made, the whale will prance about in the water with excitement! And this is no surprise as it doubles the value of all wins it makes!

The Scatter symbol is represented by a glowing pearl in a pink shell. Find 3 or more of these and you automatically win 8 free spins with a x2 multiplier on any sum you receive. However, players also have a chance to increase the number of spins and/or the multiplier. When they enter the bonus round, they will be confronted with a choice of 5 shells, of which they pick 2. In these shells are extra spins and multipliers, so they could end up winning a maximum of 33 free spins and up to x15 multipliers! Any Scatters found in these free spin rounds will add extra spins to your total.

Great Blue has another unique bonus feature called ‘Gamble’. Players can click on the button under the reels to enter this round, where they simply choose if they think the next card will be red or black. It’s a simple premise, but one that gives you the opportunity to boost your winnings, or lose the lot…

Overall, Great Blue is a game that doesn’t pay out too regularly but does offer the chance of some great wins! The theming is good and should keep players entertained, with the extra bonus features adding even more excitement to the game. The Free Spins round and the Gamble option in particular are different to many other slot games, so players are likely to enjoy the variety this game offers.

Travel down into the depths of the ocean with Great Blue slot where you will not only find plenty of marine creature, but also 5 thrilling reels!