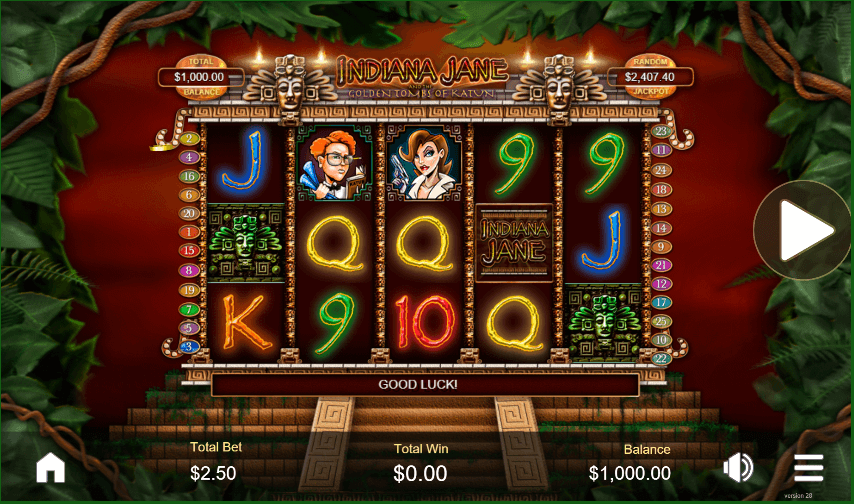 Indiana Jane is a distant relative of her more famous counterpart- Indiana Jones. Also a passionate and curious archaeologist, Indiana Jane takes players on a trek through the jungle to discover Mayan myths and legends, and possibly also some treasure! For those who loved the excitement of the Indiana Jones movies, you will find Indiana Jane matched in excitement, but with a little bit more at stake from you! You may have watched the films, but in this game you could actually get the treasure yourself….

The game comes from RTG, with 5 reels and 25 paylines. Perhaps disappointingly for such a thrilling theme, the graphics and visuals of Indiana Jane aren’t as good as you might hope. Although they are decent, they could be more immersive and engaging for players.

Accompanied by intrepid explorer Indiana Jane, players can choose their bet level, coin value, and number of paylines up to 25) before spinning the reels.

The symbols on the reels of Indiana Jane include the standard 9, 10, J, Q, K, A, but also has some picture symbols that are higher value. For example, there is an ancient treasure, an archaeologist’s tool kit, a male colleague of Indiana Jane (could it be Indiana Jones himself?), an intricate carving, and of course Indiana Jane.

The Wild symbol on Indiana Jane is simply the logo, and this will substitute for any symbol to create a win, as well as adding a multiplier to the total. Indiana Jane’s Scatter symbol is a tomb door, and once you get three of them on the reels, you pick one to determine the number of picks you have in the bonus round.

As the tomb reveals itself, you will see a door with spheres spinning around. You just need to pick the number of spheres according to the number of picks you have got, to unlock different amounts of free spins and multipliers. This gives you an extra chance to boost your fortune, but will you be able to unlock the tomb door to reveal even greater treasures? It’s only by playing and getting some luck that you will find out!

The theme of Indiana Jane is a fun twist on the classic Indiana Jones movies. While this game is unlikely to be as successful as Harrison Ford’s franchise, it should still keep players entertained. The theming of exploration and treasure is maintained throughout the whole game, adn the bonus tomb feature adds an extra thrill and excitement.

However, other than this, the features are fairly standard and the graphics are not as advanced as on some other games. Nevertheless, it is a solid offering that many players are sure to like.

For lovers of archaeolog and adventure, Indiana Jane is a slot game inspired by the classic Indiana Jones films. With ancient treasures and a special tomb bonus round to explore, there are thrills around every corner!