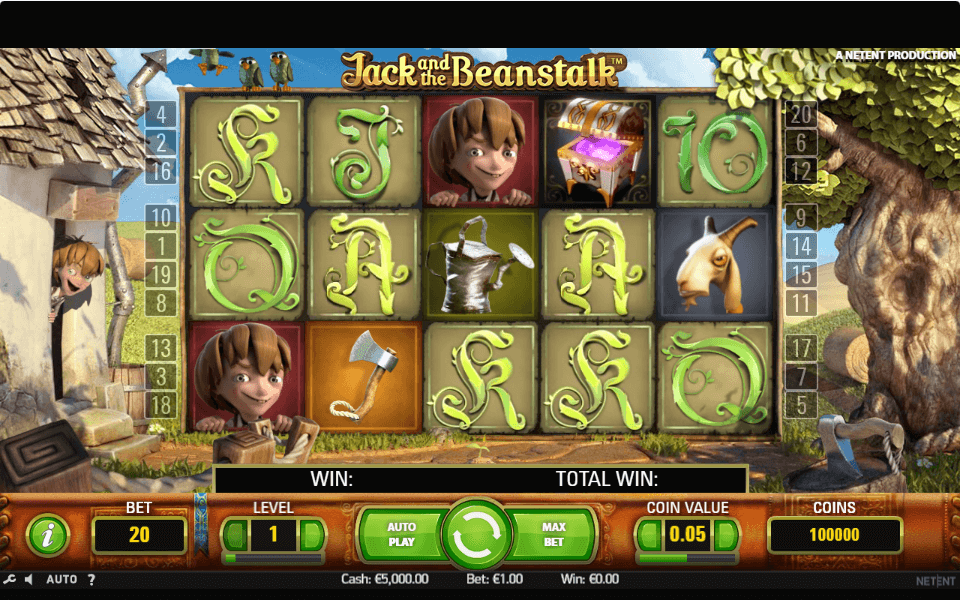 Everyone knows and loves the classic fairy-tale of Jack and the Beanstalk and, rather unsurprisingly, this slot game is based on the story! The game starts just as Jack is leaving the terrifying giant’s castle, making his way down the beanstalk with the stolen magic chicken and harp. The evil, 2-headed purple giant is close on his heels, but Jack manages to make it back to his home, where the 5-reel slot game is waiting for him!

You may have thought you had left your fairy-tale days behind you, but NetEnt has reinvented it into an exciting and adventurous slot game. With an entertaining short film to enjoy before you even start spinning, players will be drawn into the story and will aim to be as lucky as Jack!

Jack and the Beanstalk Slot has 20 paylines across the 5 reels where players can hope to form a winning combination. They can choose to bet as much or as little as they like, depending on how their luck feels that day!

The symbols on the reels that represent the smaller amounts are the same as other games- 10, J, Q, K, A- but there are some new story-themed symbols to represent higher values. There is of course Jack, who is the highest value figure, as well as the giant, a goat, an axe, and a watering can.

One of the most exciting features of this Jack and the Beanstalk slot games is the Walking Wilds symbol. Like any other Wild, it can substitute for other symbols and can multiply the winnings of that payline. However, this also has a ‘walking’ trait, which means that the symbol moves to left by one reel, and players get a re-spin (with the Wild staying on the screen). The movement to the left and the re-spins continue until there are no Wilds left on the board. This gives players a great opportunity to maximise their winnings from just one bet!

Walking Wilds aren’t the only benefit players can receive. There is also a Scatter symbol (a treasure chest with purple jewels). These are only helpful if players manage to get 3 or more across the reels, after which they can earn some additional spins!

Players should also keep an eye out for any keys that appear in reel 5. If you collect 3, 6, or 9 keys, different bonuses will be unlocked including: a Stacked Wild of 2 money bags, a Stacked Wild of 3 golden hens, and an Expanding Wild of a golden harp. These will multiply any winnings players may get and adds another level of excitement to gameplay.

What’s not to love about Jack and the Beanstalk slots? It has an exciting (and familiar story), a hero, a villain, and plenty of opportunities to win! The numerous bonus features make it more than a standard slot game, with players looking out for all kinds of symbols to see if this is their lucky chance! Also, as you would expect from NetEnt, the graphics and visual design are excellent and really add to the overall gaming experience.

Jack and the Beanstalk Slot

Everyone loves the classic fairytale of Jack and the Beanstalk! This quality slot game recreates the story with cameos from some familiar characters including the fearsome giant!