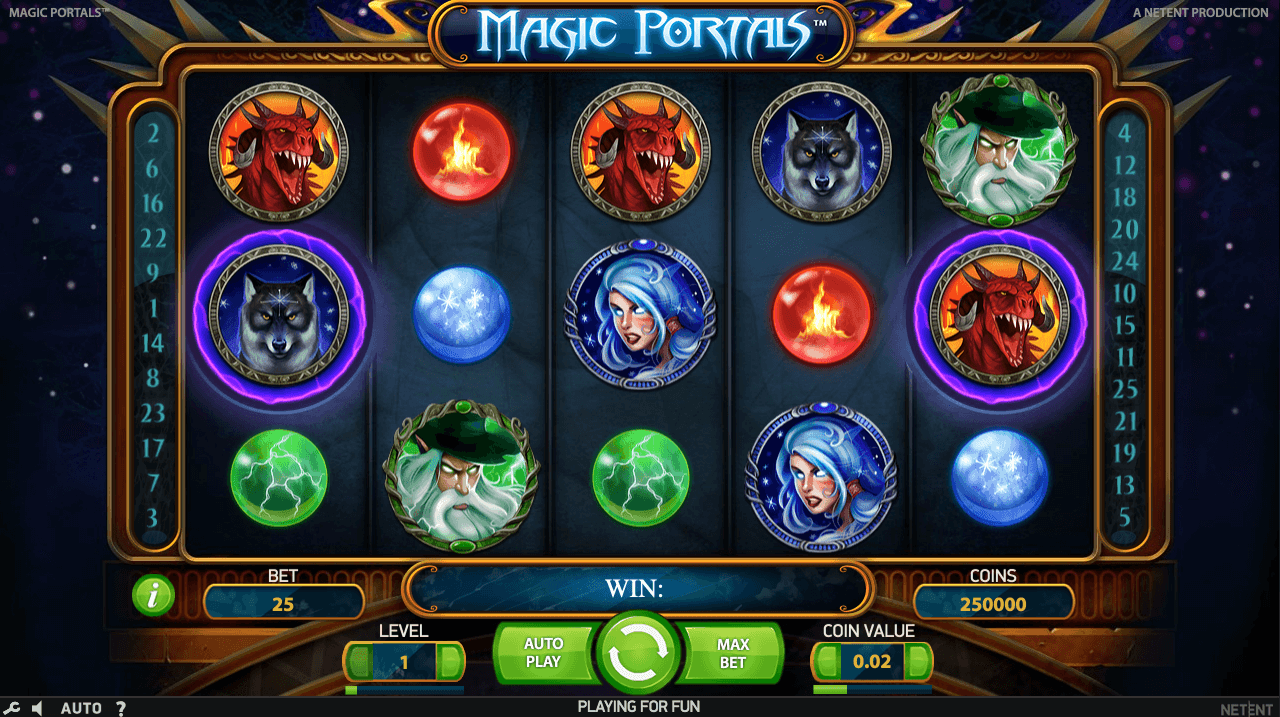 This mystical slot game transports players to a world filled with magic, wizards, and sorcerers where anything can happen! This fantasy realm is like no other place you have seen, but the game is still the same. There are 5 reels and 25 paylines which give players numerous chances to win, with or without the help of some extra magic…

NetEnt is the familiar provider behind this unfamiliar world, ensuring the game quality and visual effects are top-notch. The design of the symbols as well as the overall game are detailed and visually appealing, so players should enjoy all aspects of Magic Portals. Arguably the background and theming are a little simple compared to some other slot games, but this may be refreshing for players looking for a good game without lots of extra gimmicks to distract them.

With mystical music in the background and eerie sound effects, this game is both familiar and unfamiliar. Whilst Magic Portals is recognisably a slot game, there are different symbols and some unique features which set it apart from any other slot game on the internet.

Like with any slot game, Magic Portals allows players to set their bet level and coin value to determine how much they want to gamble on that particular spin. They can change this throughout gameplay. Then, simply pressing the spin button will get the reels turning! Alternatively, they can set the game to autoplay if they prefer. So far, no different to most slot games.

The symbols however are clearly rooted in this mystical world. The lowest value symbols are the blue, green, and red orbs of light. Then, in order of increasing value, are: a wolf, an owl, a dragon, a blue sorceress, a green wizard, and a red sorceress. If these create a winning payline, then players can net themselves a win!

There is also a Free Spins symbol that can reward players with some free spins, as long as the symbols land in the magic portals on the reels…

The magic portals are the unique element to the Magic Portals slot game. In the centre of reel 1 and reel 5 are 2 glowing magic portals which can offer players some special bonuses. For example, if the free spins symbols land in both these portals, players will activate 10 free spins!

That’s not all though. If the same symbol lands in both the magic portals, they (and any other symbol of that kind on any of the reels) will be transformed into a Wild. If you’re lucky, this could result in a big win as these Wilds can substitute other symbols on the highest possible payline.

Overall, Magic Portals isn’t one of the most complex games, but it does offer more than your basic slot game. The addition of the Magic Portals in reels 1 and 5 keeps your attention until the very end of the spin as you wait to see if the symbol in the first portal will be replicated. Although there are no other features, this slot is still appealing on several different levels whether that’s gameplay, uniqueness, or visual design.

Magic Portals is a slot game with a twist. Portals in the reels can help players win some special bonuses, if the right symbols fall into them!