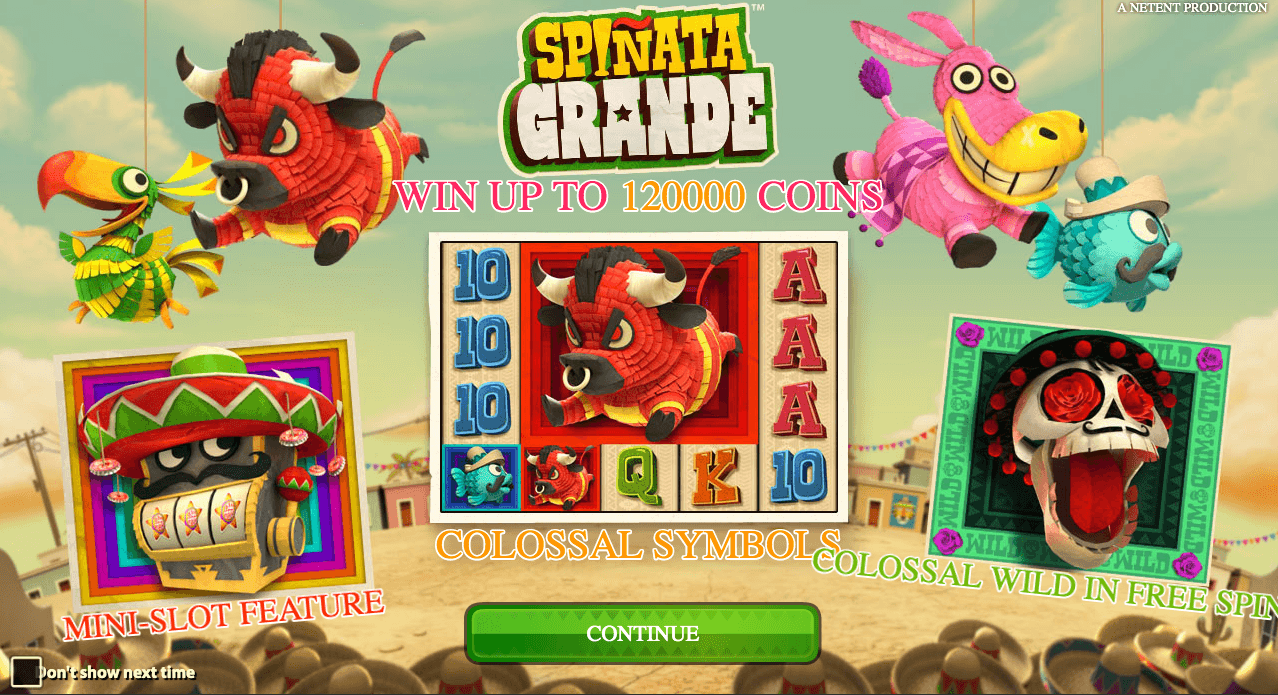 NetEnt brings the fun and excitement of a Mexican party online in the form of Spinata Grande. With vibrant colours and traditional Mexican folk music, players are sure to party all day and all night long as the fun never seems to stop! Set against a background of a dusty Mexican town with colourful bunting strewn above the streets, the party really gets started when you get a win as the trumpets blare out and the confetti falls!

These are no ordinary reels either. There are 5 reels with 4 rows and 40 possible ways to win. This means there are more symbols than normal appearing at one time, which may take some getting used to! Although you may be used to hitting pinatas, in Spinata Grande you will be watching them spin around, although there may be a chance to hit one later…

Getting the party started

Players need to do some things before they can enjoy the party. They need to first determine their bet level and coin value, and then decide whether to manually press spin or choose autoplay. Once that’s sorted, players can watch out for the pinatas and start having some fun!

As well as the usual 10, J, Q, K, A on the reels, there are some colourful pinata creatures too. Players should look out for the blue fish, yellow and green parrots, pink donkeys, and red bulls to bag themselves a solid win!

Not just any pinata

The symbols on Spinata Grande aren’t just your standard 1×1 symbol. Players will also notice that there are some Colossal symbols that take up both 2×2 and 3×3 space on the reels. Sometimes only part of them will appear on the reels (but they can still create paylines), but players should be hoping to get a full 3×3 symbol appearing on the reels as this will result in a massive win!

There are also Colossal Wilds which have the image of the Day of the Dead skull on them, making them completely unmissable! These too appear as a 3×3 symbol and will appear during the free spins bonus.

The unique feature of Spinata Grande is its mini slot feature. This is triggered by a Colossal Bonus symbol depicting a sombrero-wearing slot machine! This will get smashed like a pinata to reveal a 3×3 square of symbols which spin independently of the other reels. Players can win different coins and may earn some free spins if at least 3 multicoloured stars appear!

The Mexican fiesta theme of Spinata Grande is ideal for making a slot game fun and exciting! This game is not just relying on its party theme however, as the gameplay itself is impressive. The 4 rows are themselves fairly unique among slots, but the Colossal symbols, Colossal Wilds, mini slot feature and other bonuses make this game stand out even more from other titles. With plenty of opportunities to win, Spinata Grande is certainly a party that players won’t forget in a hurry!

Recreate the fun and vibrancy of a Mexican fiesta when you play Spinata Grande! With special mini slot features and opportunities to win big, these reels have a lot to offer!