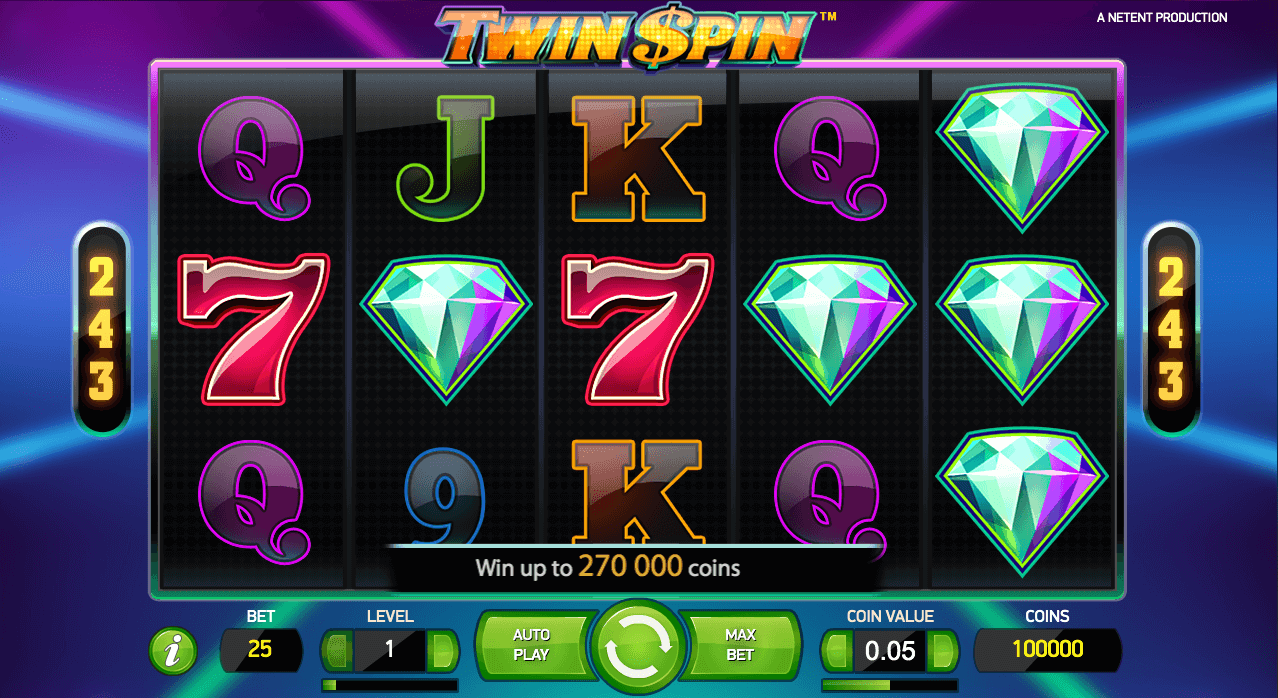 Twin Spin is a classic slot machine that will suit any old-school casino fan. With the vibe of a 1950s fruit machine found up and down the UK, Twin Spins recreates this game but with some added twists and excitement. This slot game, which is created by NetEnt, makes for a refreshing change from some of the more complex and adventure-themed slots that dominate the market, and holds appeal for casino players old and new.

The premise of Twin Spins is simple, just press the button and let the reels spin! The game will feel familiar to anyone who has played on a fruit machine, with cherries, numbers, letters, bells, bars, lucky 7s, and the valuable diamond all making an appearance.

Of course, the aim is to find a winning combination and, with 243 different paylines, players will hope to get lucky! Each payline will offer varying payouts, some of which will be very small indeed. Indeed, even on some ‘wins’ you may not gain back the initial sum you deposited. However, there is also the opportunity to win big, it just depends on how lucky you are feeling and in what order the symbols stop!

Users can choose the bet levels they play with, and also try the game for free in practice mode if they wish.

Twin Spin is a basic game, but its standout feature- and what gives it its name- is the “twin reel”. As you spin the reels, two of the five will get a red box around them, signally that the “twin reel” feature has been activated. This means that the symbols will be replicated on both these reels, theoretically improving your chances of winning! Whether it actually does so, you’ll have to play to find out.

In some instances, the twin reel may expand to include three, four, or even all five reels, but you would have to be very lucky for this to happen!

There aren’t many other bonuses or features, if any, so Twin Spins really is as basic a game as you can get.

Visually, Twin Spins is appealing with good graphics, as you may expect from the gaming giants of NetEnt. It is similar to most other slot machine games, with a sci-fi theme and colourful graphics to keep players gripped to the screen.

It also has some funky music in the background to keep you entertained, although somemay find this annoying! You will also know when you’ve won as a loud jackpot noise will rouse you from any daydreams!

Twin Spins has an autoplay feature which players can set for a certain number of spins. Of course, they are free to play manually too if they prefer.

It may be a simple and basic game, but Twin Spins continues to hold some appeal. New online casino players may enjoy it as they try to discover the types of games they like, whilst experienced players may enjoy the simplicity as a refreshing change. The payouts can vary from small change to sizeable wins, but there will also be plenty of near misses that so nearly made you a winner!

Twin Spin is perfect for lovers of the classic, fruit arcade machines. With a several special features to look out for, this is a basic but entertaining slot game.