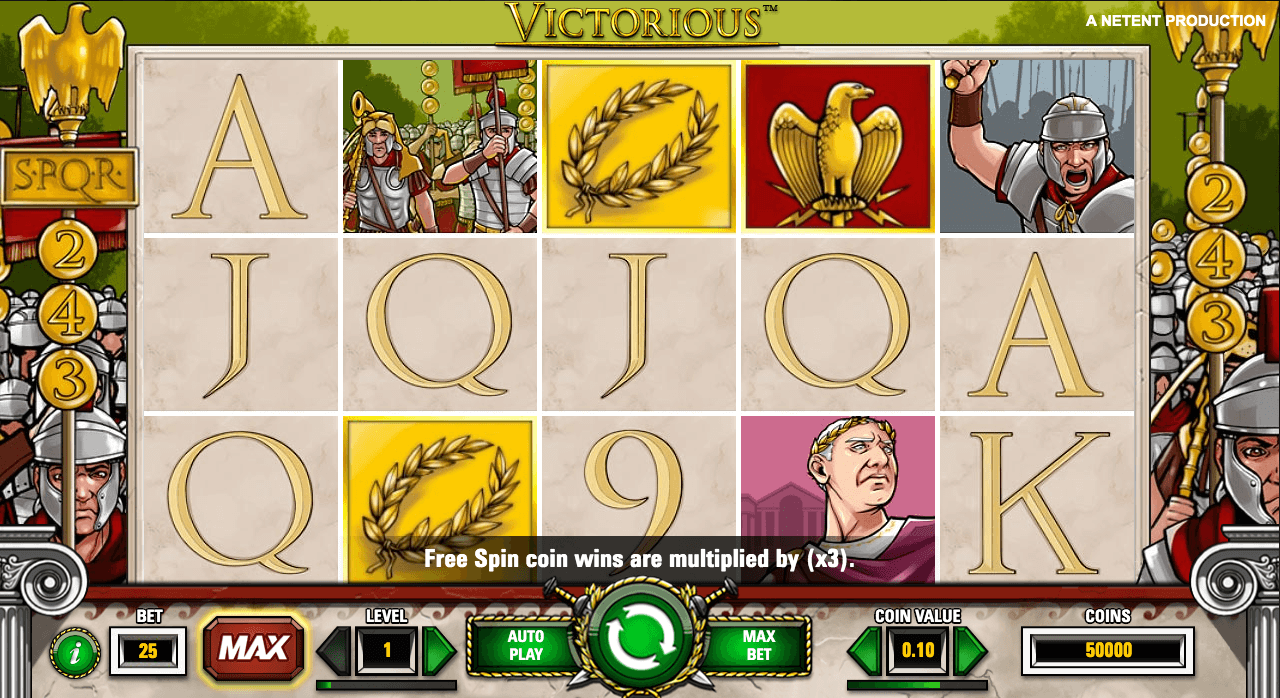 Victorious Slots recreates the drama of the Roman Colosseum as it transports players back to the time of the Roman Empire. With columns of soldiers in full armour on the horizon and the sounds of their marching boots as they advance, this game is surely one of the most dramatic on the internet!

As you play you will see familiar Roman items, including Galeas, laurel wreaths, togas, gold coins, and spears, so there’s no forgetting where you are! The Romans created a fair amount of drama during their time, and Victorious also aims to offer a dramatic yet fun game for all players.

The reels are great marble slabs with the figures engraved or painted on, which again adds to the Roman feel. NetEnt is the provider behind this game and they ensure that the visual design and gameplay is of good quality and appealing for players.

Victorious offers an astonishing 243 different paylines, so theoretically players have huge opportunities to win. However, some of the wins are so small that they are unlikely to mean much to the recipient. Still, there are opportunities for some great wins too, it just depends on how lucky you are!

To start spinning the reels, players just need to press spin, or autoplay if they prefer to just watch. First though, they have to set the bet levels and the value of the coins to determine how much money they want to gamble.

Although the game is set many thousands of years ago, it still has the same symbols as many other slot games, including 9, 10, J, Q, K, A. It does however have some Roman-inspired figures, such as an army, a charging soldier, a centurion, and, most valuable of all, the Roman emperor. These figures can offer varying levels of wins along the different paylines, with only the highest combination counting.

Of course, Victorious has Wild and Scatter symbols that can unlock some extra win opportunities for players. The Wild symbol, which is a golden eagle on a red background can act as a substitute for other symbols on the reels to form a winning payline.

A golden wreath is the symbol for the Scatter feature, but it is only activated when 3 or more appear across the reels. If you get 3 or more symbols, Free Spins mode is activated and a Roman soldier takes you to yet another, more richly designed arena to play. 3 symbols gives you 15 free spins, 4 gives you 20, and 5 gives you 25. Furthermore, anything you win in this mode will be multiplied by 3!

Victorious Slots is a visually stunning game with an exciting Roman theme. However, despite the many winning paylines, there are few features for players to get truly excited about. The game has few unique qualities to make this a must-play title, as the Wild and Scatter symbols are fairly typical of many other slot games, Nevertheless, it is still a solid choice for players old and new.

Fans of the Romans will love this game as the reels are set in a mighty colosseum. With gladiators and emperors, this slot game will transport you back thousands of years!